Patent Pending Have Announced That They Have A New Cover Album 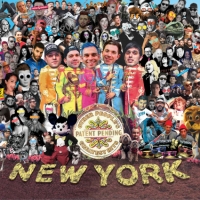 As they get ready to hit the UK for their Spring Break Tour, American party punkers Patent Pending have announced that they have a new cover album! While the band has been known for playing cover songs at their shows, this time they were so excited about the tracks chosen, and the way they were revisited, that they absolutely had to hit the studio to record them. 'Other People's Greatest Hits' comes out on May 26th via Rude Records, and the first song "Spice Up Your Life" is available here.
Read more...
Monday, 01 May 2017 14:58

It’s rare that a band drops a debut release with the amount of polish and ambition that is seen across The Without’s new EP “Factions”. The Portland-based metal outfit describe themselves as a creative venture between five lifelong friends, but this isn’t the US rockers first rodeo sharing they had been fans of each other’s work for years before coming together as “The Without”.
Read more...
Thursday, 27 April 2017 11:07

The Without Have Dropped Their Outstanding Debut EP 'Factions'

Portland, OR-based rockers, The Without have dropped their debut EP!
Read more...