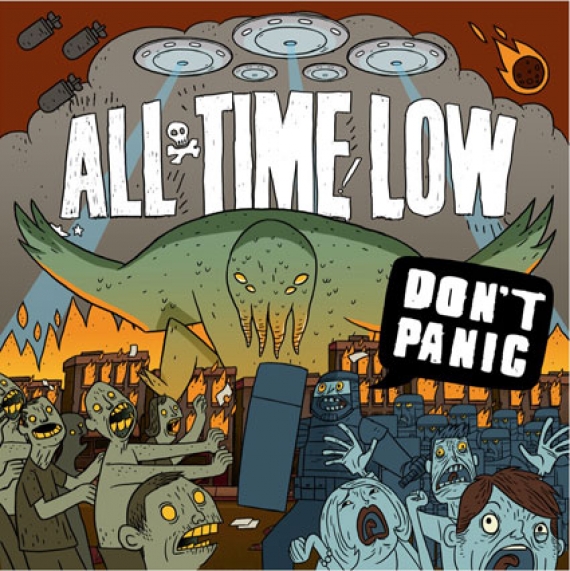 All Time Low are back with a new album!

All Time Low recently released the album ‘Don’t Panic’ which went to no. 9 in the UK Top 40 album chart. Not too bad considering their last album ‘Dirty Work’ only got to no.20.

‘Don’t Panic’ is what many people think the album ‘Dirty Work’ should have been. As it has that ATL edge that was lost in the previous album due to co – writers and a big record label. But fear not ATL has come back with a new album released with their old record label ‘Hopeless Records’ and only one co – written song, by the man Patrick Stump himself.

As for the album it’s a great listen from beginning to end, and you really get a sense of all the emotion and frustration the band went through with their last album.  This album definitely has a mix of both old ALT and some of their newer poppier rock.
Three songs you should definitely check out are:

- The Reckless and The Brave.
- If these sheets were states.
- The Irony of Choking on A lifesaver.

The Reckless and The Brave, shows off just how good song writers All Time Low are, while at the same time it’s a very different sounding song from the majorly of other songs they have written .

If these sheets were states has that classic All Time Low feel to it that you would hear on their earlier albums. As it has that roughish pop punk feel. A definite listen if you like their previous albums.

On the other hand The irony of Choking on a Lifesaver has a similar sound to that of ‘Dirty Work’ with a slightly bitter twist to it. A very catchy song!

If you’re a fan of the band this is an album you will be sure to like and the same for if you are a fan of pop punk, and if you not … well you might just suspires yourself.

Last modified on Wednesday, 24 October 2012 20:11
Read 3633 times
Published in News & Reviews
Tagged under
Tweet
More in this category: « Set It Off - Cinematics - Album Review Futures Call it a Day »