Our Zone Found Tour featuring As It Is, Like Torches,Underline The Sky, 48 Hours, Homebound - 12th September - Islington Academy, London 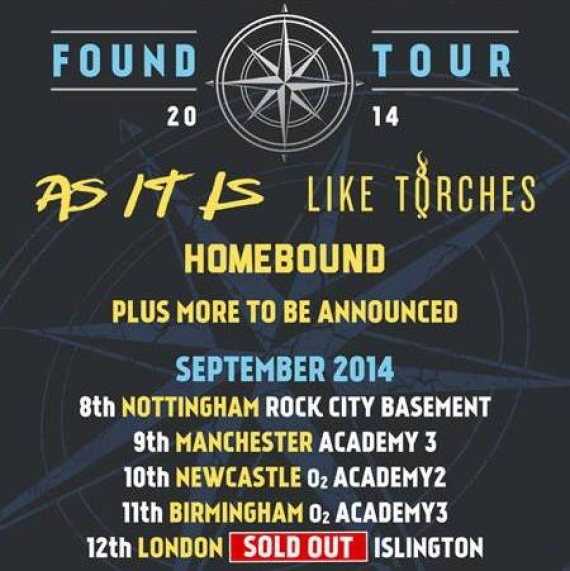 It's a night of great new talent!

Homebound start the night off well with their pop punk style. This was a fun set from the lads playing a number of songs from their debut EP 'Coming Of Age’. The band also added a great cover of Alien Ant Farm’s song 'Movies'. They finished off the set with their lead single 'Coming Of Age' from the new EP! This was a great set for their first tour.

Heavier band on the set, 48 Hours were a band that had another great set with their rockier style. Playing many songs from their latest album ‘Recovery’, that's was released late year!

Woman fronted band, Underline The Sky had what can only be described as an excitable and funny set as the band played their upbeat rock songs, including a cover of Beyonce’s ‘Halo’.

Stockholm’s, Sweden very own, Like Torches really brought it tonight, playing songs from their album ‘Keep Your Head High’,that was released a year ago. The band really through themselves into every song and I mean both emotionally and quite literally! An exciting and energetic band and one to watch!

It didn't take headlines, As It Is very long at all to gain a big crowd reaction, and the energy didn’t stop coming from the beginning to the end of the set! As It Is, also brought on a kids basketball hoop for members of the crowd to shot into, why you may ask, well why the hell not! Needless to say when one person did get it in from the crowd and the only one to do so on the whole of the tour, there was quite a cheer.

Playing all four songs from their new EP 'This Mind Of Mine' as well as a few old ones for good measure. The band ever treated the fans to two brand new songs 'Turn Back To Me' and 'Sorry'. If these songs are anything to go by for the new record, then this record is going to be pretty exciting.  The night finished on a high with, As It Is having a mass sing along to their song ‘Can’t Save Myself’.