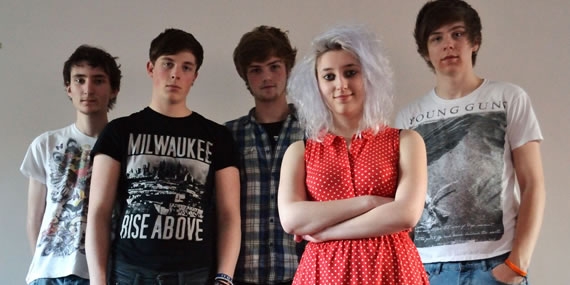 Hello there! I’ve got another great band for you this week!

Chase the Enemy is a five piece alternative rock band from Chelmsford, Essex. Since forming in the summer of 2010 they have won a number of battle of the bands, they have also played with the likes of The Dangerous Summer, Mallory Knox and Futures.

In the summer of last year (2011) Chase the Enemy toured East Anglia with When Giants Fall and they managed to raise £250 for cancer research. As well as this they also released their 6 track self-titled EP in April 2011.

Well now that you all know the band! Let’s review the music!

After listening to this EP I can honestly say this is a great listen from beginning to end. As the band blend they instruments well with the powerful vocals to make a smooth yet full sound. That will have you singing in no time.

This is a band that know how to play and write their music well. Their EP is a must listen to and you will be crazy not to.

Three songs you should listen to are ‘Weigh me Down’, ‘Jewels’ and ‘Lionheart’.

Their new single ‘I've Lost Some, I've Won Some’ is another excellent song and if this is any indication to what the new EP will sound like, I’m very much look forward to hearing it and its going to be a cracker of an EP.

Check out Chase the Enemy on their Facebook http://www.facebook.com/chasetheenemy . This is a band to watch out for in the future.

Read 12690 times
Published in News & Reviews
Tagged under
Tweet
More in this category: « We Are Saviours - Take Off Your Clothes - Video Review From Inside – Inside Out EP – Review »