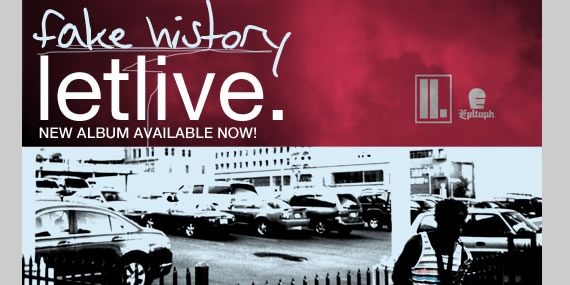 It’s been a big year for Letlive over here in the UK and even though their last album Fake History came out in April of 2010 and then was re –released in 2011, I still believe it isn’t given the credit it deserves.

Letlive’s album Fake History is a great example of post – hardcore at its very best. With their cleverly written lyrics and electric energy in every one of their songs, there is no doubt you will be singing to every last word.

Even if there weren’t lyrics to these songs, the guitar riffs and drum beats are incredible and will have you moshing in no time.

As a band and as an album they are both an unstoppable force of musical talent that will keep you listening.

Read 7435 times
Published in News & Reviews
Tagged under
Tweet
More in this category: « The city calls - a spark to ignite - cd review Set It Off - Horrible Kids - EP Review »