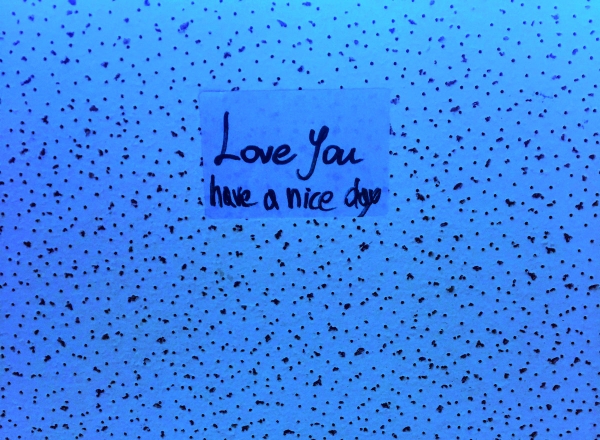 We caught up with Dan Griffin (formerly Sal Paradise frontman) of Laowai to chat about his new record ‘Love You, Have a Nice Day’, along with what he will be up to this year!

“Good thanks! Currently on a Southern Rail train to Milton Keynes. It's all glamour, all the time.”

You have released your new EP 'Love You, Have A Nice Day' can you tell me a little bit about the release?

“It's a short record, meant mostly as a precursor to a longer record that will be out next year, probably with a full band (Shoutout to the Kelly's). That's not to say I'm not proud of it because I really am.”

What is the record about as a whole?

“Feeling a little bit isolated and coming to terms with being okay in your own company. Though also remembering not to take yourself so seriously.”

“Unlike previous recording processes, I deliberately wanted a short turnaround between when I wrote the song and when I recorded it. So I set up a small recording room in my girlfriend's parents' house and wrote in the morning, recorded in the afternoon. I'd tweak it from there really but I wanted to retain the inherent spontaneity and excitement that bristles when you first write a song. This also helped because I could chuck the songs that, upon reflection, weren't good enough and keep the absolute crackers.”

What is your favourite track from the record and why?

“’Ernest’. It's named after my grandad, though no one ever calls him that. I once called him Ernest and he asked me where I got my black eye from. I answered with "What black eye?" and he said "The one I'll give you if you call me Ernest again". Grandads, eh? No one tell him there's a song on my record about him, please.”

How does Laowai compare to other musical projects you have done?

“It's definitely been more solitary thus far! Though that'll probably change over the next couple of months. It's the first proper solo project I've done and while the autonomy is refreshing, it can sometimes be difficult getting caught up in your own head. When there's no one there to tell you your idea is shit, you can produce some absolutely dire songs. Hopefully I've avoided that this time!”

How did Laowai come about?

“I moved from London to the Midlands and had a bit of spare time on my hands. I felt that I really needed to make a record and that if it was good I'd roll with it and if it wasn't then I'd probably just take up cricket or something. Luckily, people seemed to like what I wrote and interest grew a bit. It's all snowballed from there, really.”

What and who has influenced you?

“I'm a big advocate of not remaining rigidly attached to the genre of music that you play. I also think we're incredibly lucky to have a vibrant music scene in the UK right now so I try to get out and see as much as possible. Bands like Goat Girl, The Moonlandingz, Girl Ray, The Big Moon, Childhood, Rex Orange County, Insecure Men and loads more are championing an exciting era of live music that I want to be a part of. Artists like Father John Misty, John Moreland and Bill Ryder-Jones are probably more direct influences to my sound. Also SPLURGE, who have just come off tour and are undoubtedly one of the most dynamic live acts around. Lastly, my friend JT and his judgments on my music. Oh, and my girlfriend or I'll be in trouble.”

Can fans expect to see you live any time soon.

“Heck yeah. I have some absolutely massive gigs to announce but unfortunately can't at this present moment, so people should shimmy down to the Sunflower Lounge in Birmingham on 26th September. I'll buy you a drink.”

“Hopefully a tour in October as well as some really exciting live dates up until Christmas. I'll come play to you! Send me an email!”

Describe the project in three words.

Where can fans find out more about you.

Like this page and maybe I'll write you a song::

This email address is being protected from spambots. You need JavaScript enabled to view it.