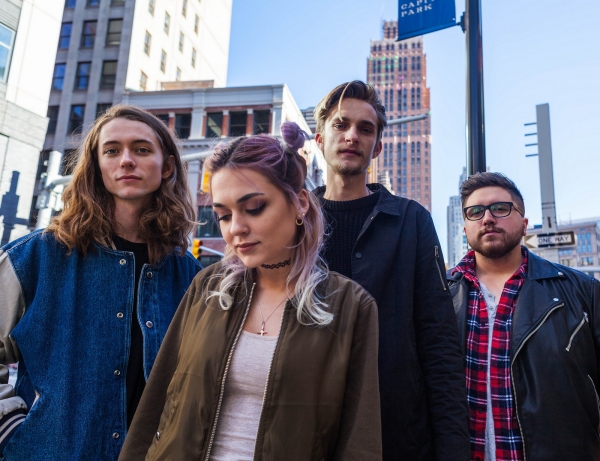 We caught up with newcomers Lilac Lungs a little while ago to chat all things from their new single to new album!

“We are doing great! Extremely busy planning and getting all the things in order for our album release, but it’s good stress. The kind we welcome”

“You have just released your new single 'Uh - Oh', can you tell me a little bit about the single?

“It’s one of our more poppy songs on the album. It has a lot of up-beat and happy sounding synths and melodies, but there is an underlying sinister vibe to it. We have been very pleased with the release of the music video as well!”

What made you pick 'Uh - Oh' as your newest single?

“We thought it was a good transition from our first single ‘Next to Nothing’ which we release a month or so prior. From that dark serious vibe that NTN has, to our most up-beat poppy song on the album, ‘Uh-Oh’ is in the perfect middle spectrum.”

How did the video idea come about?

“Our video producer Ned Ingalls is absolutely incredible. We flipped between a few ideas and it all just came naturally. We think it’s a very nice intro to all of the members in the band, we really are all best friends - we swear we’re not faking it haha! But besides us having fun and showing our friendship off, we wanted to show that there is hope. When Emily is lost in the dark basement stairwell, this really represents those low points in our life. Finally the storm clears and she is taken to safety and out enjoying and appreciating life. We left it up to interpretation for the viewer. We like doing that.”

You are also set to release your debut album 'Eventide', can you tell me more about the release?

“Yes! It is almost a surreal experience. This will be our first album release as a band (as for each member as well personally).  We are releasing it May 12th 2017, on top of having an album release live show that same day. We couldn’t be more excited, anxious, and grateful all in one. We are planning on having the album available everywhere, along with being able to stream it on all streaming platforms.”

“We really wanted to take the listener on a rollercoaster of emotions. Even down to the music itself, it changes from super upbeat tracks to very intimate and chill vibes. We really wanted this album to be an experience for the listening. The album title ‘Eventide’ is synonym for the word evening or night time. Typically, the night time is the most challenging for those who struggle with their mental health. All of us in the band can attest to this. The artwork is a never ending sunset, and we wanted to create a safe place for the listener to leave all of the things they deal with there. To stop carrying all of that struggle and get lost in that never-ending sunset.”

“So writing songs for our band starts with Emily and Johney getting together and creating the bare structure of song, including the melodies and maybe a few synths or ideas. Emily will then write the lyrics. After that, the song is then brought to the rest of the members and is performed a few times, and to add any extra flares to the song. Then, we take it to our producer and he polishes us all up. This album was a very different experience because our producer Lee Albrecht is mainly a metal producer. We were his first ever pop band that he recorded and we are more than thrilled with how all the songs turned out! We had an amazing time recording these songs. Staying in the studio for large chunks (sometimes over two weeks non-stop everyday recording music) and making lifelong friends along the way.”

What is your favourite track from the album and why?

“Hmmmm… ok this is a very difficult question because each song is so special to all of us. They are 10 new friends that we all have history with. 10 awesome characters that we want everyone to get to know.”

“We are in the process of getting a tour set up. It will be our first tour as a band and we are so anticipating getting on the road and connecting with people. Also, lots more music videos!”

“We are on every platform! Twitter: @LilacLungs / Instagram: @LilacLungsBand / Facebook: Lilac Lungs (Not including our Personals). We also are on Spotify, Apple Music, and many more!

“Thank you so much for those who took the time to read this and support us. If you haven’t heard of us yet, we hope to hear from you on any of our socials above!”