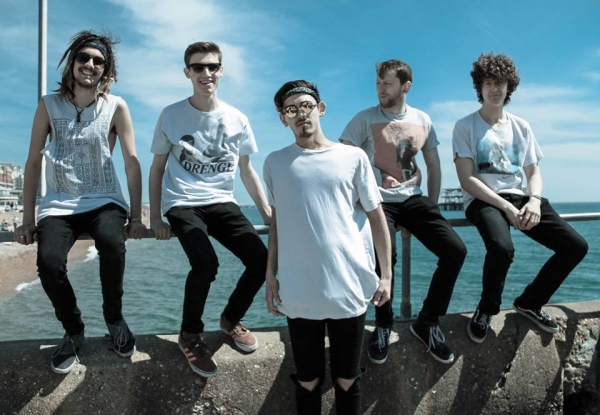 Newcomers, Oceans are set to drop their EP ‘On & On’ and have unleashed their new video single ‘Electrified’!

The Brighton-based alternative rock band that formed in September 2014 are set to drop their EP ‘On & On’ on the 6th August that will also feature their single ‘Electrified’.

So we caught up with the band to find out a little more about the new release.

You are about to drop your new EP 'On & On' can you tell me a little bit about the release?

“The release will be taking place on August 6th during 'Brighton Gay Pride' and we'll be having the EP launch at the prestigious 'Green Door Store' in Brighton. It will be a free entry event hosting an impressive bill of some of Brighton's greatest bands within the scene.”

What and who has influenced the release both musically and lyrically?

“The Brighton scene is welcoming and vast and it has influenced us a lot. Our vocalist Zach Silver writes the lyrics and he bases his lyrical content on current things as they occur in his life.”

What do you want fans to take from your new EP?

“We want the fact that we're not afraid to branch out into other genres to come across in our music. We also want the fans to think that it's like nothing they've heard.”

What can fans expect from the release?

“They can expect a very well produced EP and a big difference in sound compared to our last EP that featured different members that are no longer in the band.”

How would you say your EP differs from that of your previous release?

“The soon to be released EP features three different band members to the old EP and we personally think the last EP is incomparable to 'On & On'. The previous EP was tied down to a genre that wouldn't venture out but 'On & On' has a completely different ethos.”

What do you want to achieve as Oceans?

“Well I think the dream is to be gigging and touring as much as possible and to see a dramatic growth in audience size as we progress show to show. “

In support of the release will you be heading out on tour?

“We will be touring from September 27th - October 1st.”

“Most of us will be living with each other from August onwards! (fun fact).”

“Self indulgent, egotistical and narcissistic!”

“From this interview! Also Facebook is the centre platform of everything we do so I'd say our Facebook page.”