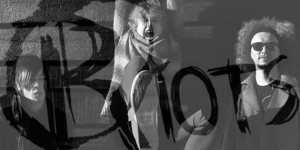 A couple of weeks ago I reviewed a band called ‘Riots’, who when describing themselves said, “(Riots) is not just a band, it’s a voice, the voice of a generation that is silenced and hushed by the money grabbing global markets and politicians that are only looking out for themselves. In an ever-growing society where the rich are getting richer and the poor poorer. As Riots we intend to get in your face, onto your streets, into your televisions, onto your radios and make some fucking noise!”