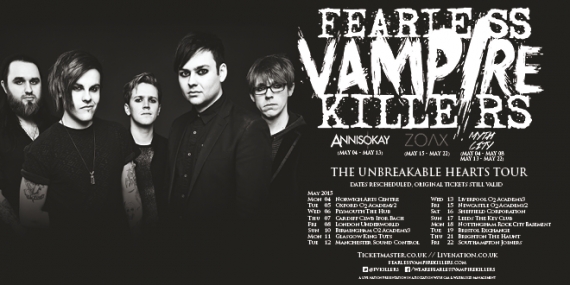 Despite the grotty weather, Fearless Vampire Killers fans were out in full force tonight!

Midlands based band, Myth City were the first band on the bill tonight with their mix of rap rock and post - hardcore.

The band played a rapid set and slipped in a few new tracks, which seemed to go down well with the audience tonight.

As the venue continues to fill, German based band, Annisokay made their way to the stage for their debut show in London.

Crashing onto the stage with their loud aggressive metalcore sound with their mix of electric sound that grabbed the crowd’s attention intently! Definitely being the heaviest band on the bill tonight!

This was an energy and great debut from Annisokay! With lot’s of crowd participation from head banging to moshing!

Headliners tonight, Fearless Vampire Killers took to the stage next in support of their album 'Unbreakable Hearts' that was released last October. They took the stage with a whole heap of energy with their Death Pop sound that they kept up through out!

Within the first song their was already mass crowd involvement, from sing alongs to a mosh pit and this continued on through much of their set!

The mix of lead vocals between Kier Kemp and Laurence Beveridge also gave the band's performance a different style and dynamic sense to it. Not to mention their vocals bounce well off one another!

This was a loud and driven performance from the Beccles based band and one there fans really wouldn't want to miss out on.