Crown The Empire Featuring Set It Off, Dangerkids and Alive Like Me - 5th February - Electric Ballroom 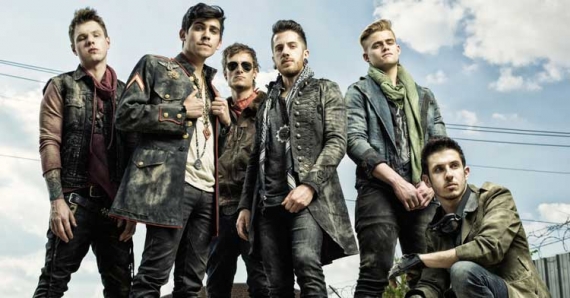 The Rise of the Runaways tour has brought together quite a collections of bands for a night of brilliant live music.

Eugene, OR based band, Alive Like Me opened up tonight and what a great set with their alternative rock style! They were well received by the almost full Electric Ballroom, with a lot of audience participation. The band left the stage stating this was the best night of their lives!

Dayton, OH very own Dangerkids also had an excellent performance. Their set tonight features songs such as 'Paper thin' a song that the band stated was a very important song to them. This was an exciting set from the band and their first ever UK tour. This is a band you need to keep an eye out for!

Set It Off took to the stage and within seconds had the attention of the crowd! The band's set tonight consisted of songs from their new album 'Duality' and their song ‘Dream Catcher’ from their previous album ‘Cinematics’ and their song ‘Partners in crime.’

They also mentioned that they have just filmed a video for their song ‘Ancient History’.

This was a killer set from the Florida based band and one they should be entirely proud of, as the crowd continued to sing along and jump about through out the set.  Frontman Cody Carson added mid way through the day that he would love to get everyone a trifle for how great the crowd was being!

This was a solid and energetic set from Set It off and lets not forget Cody Carson’s on point powerhouse vocals. This was more of a headliner set than a support performance!

Headliners Crowd The Empire took no time at all to command the crowd! With their rock sound this was a high energy and exciting performance from the Dallas, Texas band that continued from beginning to end!

Towards the beginning of their set vocalists, Andy Leo stated that this was the their biggest Crown The Empire show ever.

This was a full and passionate set from the band, Crowd The Empire also managed to get a mass sing along to their song ‘Voices’ going.

The audience were out in full focus tonight with their singing voices but also their ability to jump as the crown bounced, jumped and moshed like they their was a massive game of the floors lava going on. (And yes you do know what I mean, we have all played that game, and we all know how heated it can get!)

This was and excellent strong set from the band and one that will definitely grab the attention of people who didn't know this band before hand!