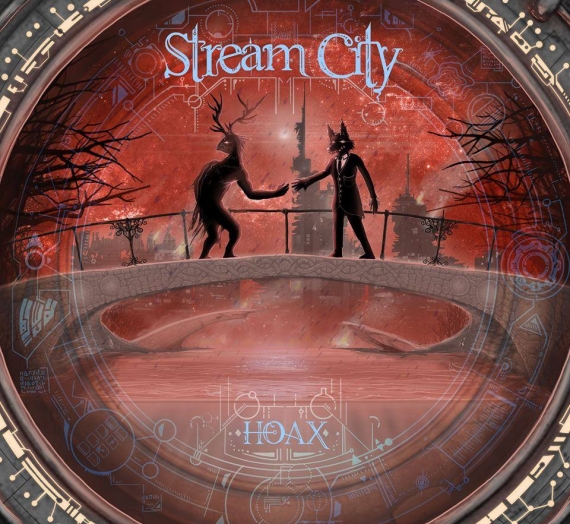 We caught up with Danish based band, Stream City to find out more about their new album ‘Hoax’ from how they got their sound to how they write their lyrics, as well as, what the band will be up to this year. The album is set for release on the 2nd February.

“Cold..! And pretty damn excited about the events to come!”

Can you introduce yourself and tell me a little bit about the band?

“My name is Dion, and you’ll find me singing and playing guitar in Stream City.

“The band started back in 2005 on the small island Bornholm. One of my best friends, Peter, and I had a passion for melodic punk rock and we wanted to play something different than 80’s / death metal (which was pretty much the norm on the island at the time). We played a lot of shows at the only real venue in the city of Rønne and we actually drew quite a crowd – 90 % of them being our friends, but we got off to a great start in terms of support. In 2006 we added Christian with his amazing violin skills and creativity. After that, our music automatically took a different path than the classic punk rock kind of style. Today the ‘punk rock’ part is just one of many elements to our music. When we moved to Copenhagen, everything froze as our drummer and our bassist quit the band.

“Later, Mikkel joined SC, as we instantly fell in love with his drumming. Mattias on bass is our latest addition to the band and what a gift he is. Before he joined the band, we released two EP’s “Hello Gravity” and “Welcome Paramnesia”.”

You have quite a different sound from most other bands, what are your influences for the sound and style?

“While we realize that our sound is different from most bands these days, it was never the intention to be different for the sake of it. This is just the outcome, when the four of us throw everything we personally think is cool in a box, before we shake it and see what happens. I love coming down to the rehearsal room with a new riff or a sketch for a song, because I know that nothing will turn out the way I expect it to. Regarding influences the list really is infinite. On ‘HOAX’ you’ll find traces of classical music, metal, punk rock, jazz, world, folk etc. Somehow we always know, when it’s a SC-riff or a song for a distant future side-project.”

You will be releasing your new album 'Hoax' in February, can you tell me a little bit about the release?

“Yes! We’ll release our debut LP through ‘Prime Collective’, which so far has been great to work with. Everything is professionally taken care of and that’s really what we need at the moment, since we don’t know the slightest thing about promotion or releasing an album (Haters might wonder if we haven’t learned anything in ten years. The answer is no).”

“It was both fun and what seemed like a never-ending process. As I mentioned before, Mattias really is a gift to this band. We recorded everything but the drums at his home and he mixed the album by himself (Driftwood Studios) with us by his side. He is without doubt the best musician I know and it takes quite an effort to get past his filter during recording sessions. In that way Matt has functioned as producer on everything on the record, from the vocals to the violins. Besides that, we’ve had absolutely no limits but our own creativity – we have no one telling us what to do and no guidelines on, how to create a whole album.

“But we worked without deadlines, no real goals besides the fun of it, so it took a while. There were some extended breaks in the process, so I think we spent about two years on the album – 18 months of writing and pre-producing and 6 months of actually producing the album.”

You write your lyrics about much more in-depth things and situations than other bands, what is your inspiration for the subject matters?

“Almost all the lyrics are written as stories including protagonists fighting bigger or smaller “black holes” in their lives. I like to see the songs as small musical journeys, where everything is connected, including the lyrics. As for the subjects, I write about everything from futuristic made-up societies with clear parallels to the present “well functioning” part of the world (‘Dying Suns’, ‘Hail The Machine’) to more down-to-earth-subjects like racism, violence, deception or escapism. Take ‘Poltergeist’ for instance, which is based on a true story. As a teacher in the making I’ve experienced so many children suffering from violence and neglect. The song is told from the point of view of a delusional kid struggling to distinguish between reality and fantasy, as his only escape from the violence of his caretakers is through his mind – hence the manic universe throughout the song.

“I find it extremely relevant to use lyrics as a way of casting light upon subjects or issues, which, in my opinion, need to be discussed or reflected on - whether the theme is about an important decision in life or the greediness of the western world. That is among other things, what I love about the punk rock universe – offensive and challenging. No one wants to hear a middle-of-the-road opinion. Although in Stream City I try to mask some of the messages through narratives and usually dark tales, as I think it suits the instrumentation. I’ve always been a sucker for short stories within the horror, sci-fi and adventure genre (Lovecraft, E.M Forster). In that way, I alone don’t get to decide what the songs are about. There will always be room for an amount of interpretation.”

In no more than 140 characters why should people check out your band?

“If you’re open-minded towards music in general, I’m sure we’ll get along just fine, but give us some time to get under your skin – ‘cause we really want to. (That turned out creepier than planned)

“I’ll try again: Because we want YOU to tag along on our epic journey of unpredictability!”

What has been a highlight for the band this year?

“Finishing the album and releasing our first single ‘The Hoax’.”

“Release party, tour throughout Denmark and hopefully festivals and touring in Europe.”

Will there be a chance of a UK tour next year?

“I hope so! I was touring as stand-in guitarist for the excellent punk rock band Stars Burns Stripes this summer. Amongst many cool people I met the drummer from Rebuke (awesome Swedish tech-punk band), who happens to live in the UK as a fulltime musician/booker/promoter/producer. He also sings and plays bass in Dead Neck - my favorite punk rock band in England at the moment. Hopefully he’ll help us set something up (HINT HINT).”