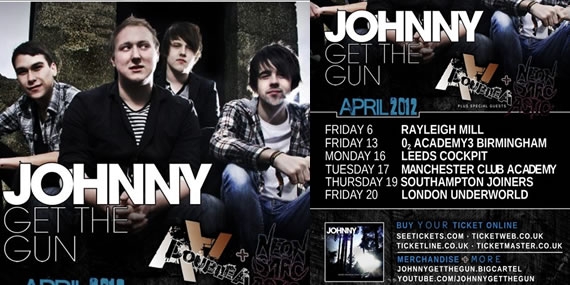 Goodbye Sky Harbour started off the show with their alternative rock sound, that gradually gets the crowd going and by the end of their set , there is what appears to be a La Macarena dance off (yes, I did say that!)

Next on is Neon Sarcastic, with their renditions of ‘Price Tag’ by Jessie J and You me at Six’s ‘Save it for the Bedroom’ which went down very well and really got the crowd participating.

London based band Double A took to the stage and had a great stage presence. With their energetic set and the consistent wave of dirty jokes, it went down a storm with the young crowd.

Headliners Johnny get the Gun had a great set, playing both their well-known songs as well as new ones. But compared to the rest on the bands on the bill tonight they really managed to get the crowd going and singing loudly, holding the crowd in the palm of their hands until the very last song¬¬¬¬¬¬¬¬¬¬¬¬¬¬¬¬ ‘As good as it gets’. (Which they played twice and was just as great and energetic the second times)