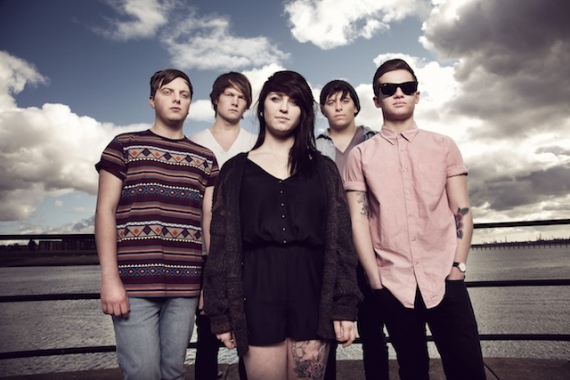 So I caught us with Forever Can Wait after the release of their debut EP ‘Beauty & Grace’ which you can see the review of here http://www.shoutitloudreviews.com/index.php/music-news/item/244-forever-can-wait-beauty-grace-ep-review .

As a band what are your musical influences?

“Emarosa mainly plus LetLive, we're all massively into both bands.”

Why should people listen to your music?

“We're a bit different. As much as people can say we're going to be like paramore just because we have a girl is stupid because we don't sound like them, we have our own sound and people should listen to us to find that out.”

How do you think you differ from other bands?

“Firstly we have a lady, people see her and think just cos she's tiny she'll come out with this little voice and not really do a lot, but she has as much balls out on stage as the guys. We also like to give the crowd a good show, we'll use the venue as our stage if we have to, we're not as crazy as some bands but we do like a good run around.”

How does it feel now that your new EP has been released?

“We feel relieved. We've had it ready to go since February and were sitting on it waiting for the right time. The release dates got pushed back, so to finally have it out there is awesome, this is the sort of music we want people to hear coming from us, not our old stuff.”

“We just want people to dig what we're doing. If more comes of it, we'll be over the moon, to have people like our band though, that's what you want. What's the point in making music if no one is going to listen to it?”

So you have just finished a UK tour, how did it go?

“It was really fun! It was our first proper tour in about 2 years, so it was good to properly get back out there again. Plus it was nice to go on the road with bands that we got along with really well.”

What does the rest of this year and next year hold for the band?

“This year, we'll be playing our final show of the year on 6th December in Guildford, which fortunately is a headline so we're well excited for that, then we'll be writing for the next release and Tash will be sorting out some shows and tours for next year.”