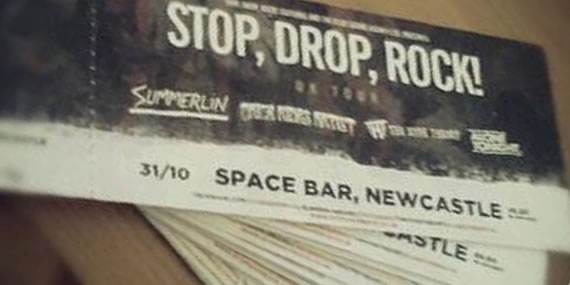 Hollywood was the first band to perform on the night and they did very well, as it is always a hard task being the first band on the bill. Their songs were catchy and by the end of their set you were left knowing some of their lyrics.

My Extraordinary were second on, these guys had a slightly heavier sound to that of the other bands, but that didn’t stop them from blazing through their set with both old songs and new songs that are still to be released.

Up next was the Southampton band The City Calls. For me the best band of the night with catchy lyrics and an energetic set. They certainly had a strong set that would be hard to follow for the final two bands.

The final support band of the night was Taking Hayley. They had a great set, which got people dancing and jumping from the word go! The band decided to do a cover of Labyrinth’s hit song Earthquake, which went down a storm.

It was going to be a hard task for The Famous Class to follow after having just witnessed four great bands before them and sadly it showed. Their set lacked anything special and as for the mash up, the song ‘Blessed with a Curse’ by Bring me the Horizon just didn’t work as a pop punk cover. However, I will applaud them for the attempt. Having said this they did get the crowd going and continued this until the end.

Overall the Stop. Drop. Rock! Tour was a success and a good night!