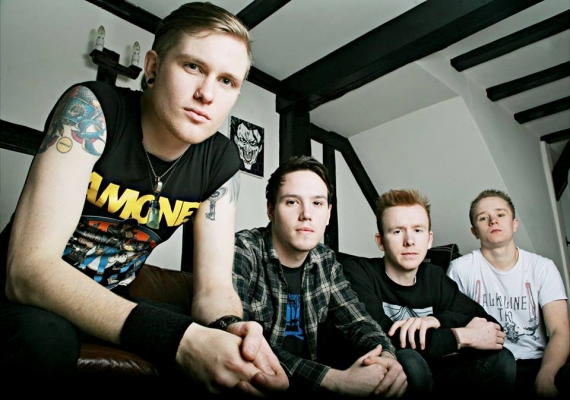 Miss Vincent not long ago released their mini – album ‘Creepy’ so I though why not find out a little more about this band!

What are your musical influences for the new mini album?

“For Creepy we wanted to try and encapsulate how we sound as a band in 5 tracks, so what we got was a mish mash of all our different influences. Not to say we sound too much like any one of them, but there's definitely little nods to bands like Alkaline Trio, Ramones, Misfits, NOFX, Bad Religion, Green Day… Basically all the bands that made us want to make music. We aimed to take all the things we love about our favourite bands and put our own spin on it, and bring some of our own sound to the table. Every band has component influences though, and you can definitely hear ours on Creepy.”

“Because we'll be sad if you don't, and you might just like us! We put a lot of hard work into everything we do and hopefully that comes across live and on CD. We tour as much as we possibly can and that really has a huge impact on the way we approach playing live. You won't find a band that loves doing this more than we do, we're just looking for a chance to prove ourselves.”

What can fans or listeners expect from the new mini album?

“Hooks, big choruses, catchy melodies and lots of energy. We feel like it's quite an accessible record and everyone seems to hear something a little different so we like to think there's something for everyone. We've had loads of different comparisons from people, some obvious ones like Bad Religion, Alkaline Trio, AFI, but also some that have come out of left field a bit, everything form Panic at the Disco to Guns and Roses!”

What do fans not know about the band that you think they should?

“There is a secret fifth member of the band who is invisible and doesn't play an instrument or sing. His name is Tarquin and he goes everywhere with us, without him we wouldn't be where we are today, we owe everything to him.”

How are you feeling having just released your debut mini album?

“It feels great to finally have it out in the open as it's been about a year in the making. We spent a long time touring these songs and working on them so it feels like it's been a long time coming for us.”

How did it go down with the fans?

“The response has been really good so far from fans and critics. People really seem to be getting into it and get what we're doing, crowds have been singing along to all the new stuff on our EP release tour as well which is amazing to see. We couldn't be happier with the way people have reacted so far!”

Not long ago you finished a run of UK dates, how did it go?

“The August tour was awesome, we went to a bunch of new cities and made some new friends as well as going back to some familiar places. We've really noticed the momentum building with each tour that we do (we're currently on our EP release tour and writing this in the van!) and we just hope that things keep moving in the right direction.”

“We're hoping to get one more tour in before the end of the year, so that we can revisit some of our favourite places from this past year and get out to a bunch of new ones as well. Looking ahead to 2014, we're hoping it'll be more of the same - we'd love to be able to get out to Europe for a run of shows, so we're working hard to try and make that happen. After that, who knows.. Another release? Alien invasion? We'll see….”

Where do you realistically and hope to see yourselves in 5 to 10 years' time?

“We don't really think in terms of specific long term goals, but we'd love to be able to do this constantly. To be able to tour all year round and make a decent living doing it might seem like a pipe dream, but if we put in all the work that we can and give it our best shot, then you never know what could happen. We just want to make the best music we can and play as many shows as possible.”