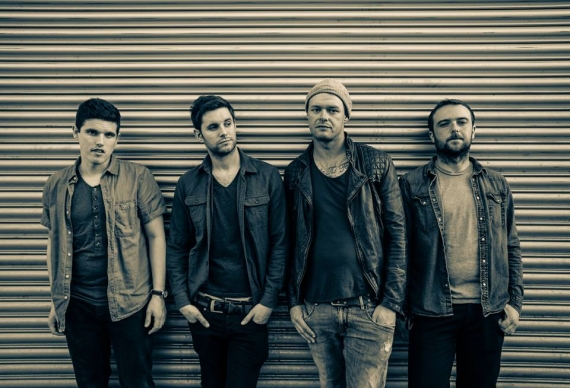 So I caught up with Through Colour to have a chat and to find out a little more about the band!

What are your musical influences for the new EP?

“I don't think we necessarily have too many influences for this EP as such. In the past we used to write music to sound a certain way or fit in with a particular genre, where as this time, we just wanted to write what we enjoyed. When we took a step back after the mixes came back, we then realised there was a strong theme on the songs about the dreaming and wanting a better life and making it a reality. We all listen to SO much different music that when we write, we just try and capture how we feel at that time, rather than being influenced by another band/artist's work. Having said that, we don't mean that in a way that no one inspires us. We all started doing what we do in the band down to the bands and artist's we got into years ago.”

“It's been nice with some of the early reviews for 'Somnium' as quite a few of them have described us as an honest band. I think that's definitely how we feel about this band. We've got to that point now where we just want to write music that we enjoy and can be proud of. We just appreciate anyone who takes the time to listen and enjoy what we do.  We genuinely can't thank them enough. We don't want to ram it down people's throats and constantly barrage it at them to check us out. So I guess, if you want to check us out, do it, if you like what we do, then awesome. If not, then hey, not everyone's goanna enjoy it!”

What can fans or new listeners expect from the new EP?

“Five tracks that we've worked extremely hard on! A story about a band's change and process in both sound and location. We definitely feel we pushed ourselves more than we ever have on this EP. I think a lot of people will be shocked by the new sound we've adapted.”

“It's quite funny when people realise that we used to be 'My Turn To Kill' when they see us live. We always get asked to play 'Kids Of Cancer' even now and we haven't played that song in about 5 years now! It's still quite nice though that people enjoyed that song so much!”

How do you feel your relocation from North Wales to Manchester has helped you and the bands?

“It's definitely helped in terms of writing and getting to meet up/rehearse more frequently. It also inspired a lot of the lyrics on the second EP. It was a complete new way of life when we moved here. It's a shame that there aren't so many opportunities in North Wales for a lot of bands as there really are some incredible bands who live there. It was nice after being so burnt out back home to actually have new things to write about and be inspired about. I think it's possible that we may not have even been a band anymore if we'd have stayed.”

What made you decide to release the new EP in a double release series?

“We didn't intend to do that originally, but again, when we listened back to the tracks we had and the one's we had demoed, we realised that they had to different theme's that just wouldn't have worked well together. It wasn't a case of us deliberately setting out to make part 1 and part 2, but we definitely wanted people to see how much the move had helped us progress and grow as musicians. The next EP will sound completely different from anything else on 'Somnium' which to us, is really really exciting!”

“We're really excited for everyone to hear the EP, that's for sure. Apart from that, we can't wait to get back out on the road and play some shows and play this stuff to people now that they can actually hear it. We have another video release on it's way and also will be back in the studio to finish off the second EP in the double part series. Then, who know. Eventually we'd love to make it out to Europe to play some shows, as we have some people out there who have been waiting to see us play for a good while!”

“Ideally we'd love to be at the stage where we can do this full time with a good 3 - 4 strong albums under our belt. I think that would be the ultimate goal. To be full time musicians. So fingers crossed that's something we can achieve. If not, then I don't think we'll ever stop creating and writing music. We've been doing this so long now, it's all we know! I still get the same excitement now as I did when we wrote our first song!”