Boyzone announce MICCOLI as special guests on their ‘Thank You & Goodnight” farewell tour.

Birmingham alternative Indie band continues to break new ground. MICCOLI are a band known for their beautifully blended harmonies, ethereal tones and striking visual artistry and these rising starts are set to take the stage with legendary band Boyzone on their farewell ‘THANK YOU & GOODNIGHT’ UK arena tour starting on 20 January 2019.

During the tour MICCOLI will be performing tracks from their debut album Arrhythmia which will launch on Monday 01 April 2019.

MICCOLI are remarkable for many reasons: they are siblings; Alessio, Adriano and Francesca are singer song-writers and classically trained musicians who not only produce their own music but also shoot, direct, produce and edit their own award-winning music videos and run their own video production company.

And for a second consecutive year their visual artistry has been recognized by the Birmingham Film Festival. They recently won the Best Music Video for their track ‘Ledge’ which is taken from their forthcoming debut album Arrhythmia to be released in January 2019. MICCOLI are here pictured with Duran Duran’s Nick Rhodes shortly after being presented with their award. 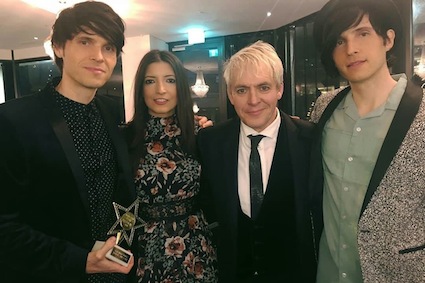 MICCOLI are understandably excited about supporting Boyzone on their sell-out arena tour.

Commenting the band said: "We are so excited to be supporting Boyzone on their farewell tour. It's pretty bonkers that we get to share this moment with them, celebrating their amazing career and their music that has been the soundtrack to so many people's lives. Roll on 2019!"

MICCOLI have spent the past few years touring extensively and living all over the world, developing their unique style and they are now set to bring this to the stage.

The video for ‘Ledge’ will be released on 07 January 2019. In the mean-time watch MICCOLI perform track ‘Idle Stranger’ in their award-winning video here.

Last modified on Saturday, 22 December 2018 15:00
Read 4835 times
Published in News & Reviews
Tweet
More in this category: « Community: The Missing Piece in the Music Industry Select Captain - Off To Save The World - Album - Review »