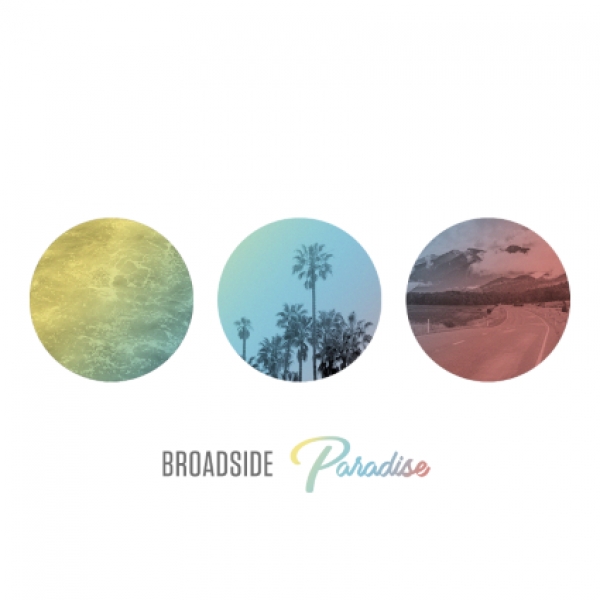 Broadside are here with their new album ‘Paradise’!

Broadside will be releasing their new album on the 16th June. ‘Paradise’ doesn’t completely change direction from their 2015 debut ‘Old Bones’, but it shows a remarkable triumph from a band that has rarely left the road since that year. “The whole concept of ‘Paradise’ is that you should chase that little view of happiness you create in your mind,” explains front-man Ollie Baxxter. “We often put our dreams and desires to the side believing they’re unrealistic, but this record is about building a bridge to reach your goals, your dream, your...’Paradise’.”

By the summer of 2016, BROADSIDE circled the US multiple times with the likes of State Champs, Roam, and Handguns to name a few, and the demand for their punk-rooted pop anthems escalated, as they were constantly ushered to larger stages during that summers’ Vans Warped Tour. On one particular stop, Baxxter was befriended by a young, hearing impaired fan who had recently gone through ear reconstructive surgery to repair her full hearing. “I met this anxious young woman who was wearing a huge, comforting smile while waiting in line to meet us. She told me that our band was one of the first she had ever heard at full capacity, and that our performance moved her in a way she never felt before, and how lucky she was to have been able to physically hear the set. I couldn't say a word, except to hold her close and cry because it moved in a way that I've never felt. Here stood a girl, no older than my own baby sister, thanking me for performing. I was just doing my job and it was really me who should have thanked her for her strength and courage to share her story. Moments like that are exactly why I write to the youth in our songs. PUSH THROUGH, OVER ANY AND ALL OBSTACLES.”

The former Richmond, VA outfit now calls Los Angeles home, where they teamed up again with New Found Glory & All Time Low producer Kyle Black in January of 2017 to lay down the groundwork for Paradise. “You know what, Kyle Black is a wildman who knows what he is doing, and we were lucky to be able to record another record with him. I hope this record made him proud of us,” admits Baxxter.

Guitarist Niles Gregory added: “This record is the sound we have been trying to achieve all of our career, we aren't afraid to try new things and that is apparent with ‘Paradise’.”

‘Paradise’ is an outstanding release from the four piece! Filled to the brim with killer guitar licks and hooks and dynamic drumbeats this is a release that will have you on your feet from the first note until the last. This is a record to put a smile on your face with its fast paced, energetic summer vibes, it’s hard not to fall in love with a release like this.

Vocally this is a strong release from the band with impassioned vocals and clever and ever so catchy lyrics. This is a record make for a live show with its raw energy and lyrics that deserve to be sung at the top of your lungs as you throw your hands into the air.

For the most part, this is pop punk at its best but Broadside have also added teasers of other genres into the mix to give this record an edge that you can’t ignore!

Broadside are a band to start watching!