Login
Facebook Twitter YouTube
Recent activities 827 days 19 hours 19 minutes ago
9 Total members
Female members: 0
Male members: 0
You are here : Home / News & Reviews / Medictation Are Hitting The Road For Their UK Tour In July!
A+ A A-
24 May

Medictation Are Hitting The Road For Their UK Tour In July! 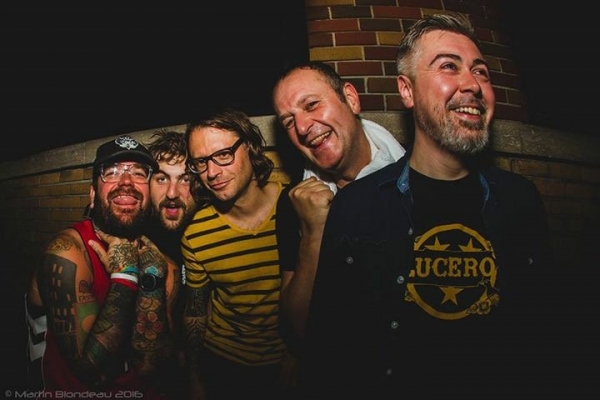 Medictation are gearing up for their UK tour dates in July, which will see them performing their album 'Warm Places' in its entirety!

In 2008 Graeme Philliskirk from Leatherface, landed on the shores of Canada to begin the band’s Stormy Petrel World Tour. In support of this leg of the journey was Yesterday’s Ring, a rag tag of Montreal mongrel punks, headed by the charismatic lead singer Hugo Mudie who, also happened to be frontman for The Sainte Catherines.

Not long after the demise of Leatherface, Graeme crossed paths with his former band mate, guitarist Dickie Hammond and they both expressed an interest in playing music together once again.

So, two generations of punk rockers from both sides of the atlantic whose mutual affection and appreciation for each other’s music, and DIY approach led them to join forces for a unique collaboration. They named their monster project Medictation.

The band went on to their first Canadian tour in 2016. Graeme recruited Bear Trade singer and guitarist Greg Robson at the request of Dickie Hammond, prior to his passing.

Following the success of this tour, Medictation are hitting the road for some rare performances throughout the UK in July 2017. The band will be performing 'Warm Places' in its entirety.

When talking about the tour Medication stated how the tour came about:

Hugo; "It was when we finished the first tour in Canada, we all enjoyed it so much, we agreed to try and fit another tour in."

Graeme: "As long as we could find the time, to meet up again, we said we would do it, luckily we all had a free period in July, so here we are. We had been asked to do Germany but that would need two weeks and we could only fit one week in, so we opted for the UK.

"I think for announcing the dates we are releasing a Video, maybe two, we will see, so watch out for that, if it happens, it would be good.

"Medictation will be joined on tour by long-time friend Dan Goatham and his band Spoilers."

Medication went on further to discuss how excited they are for the tour:

Hugo - "It's been a while since I have been to the UK and I have always enjoyed it, the last time was with the St Catherines.

"I think being with Graeme, it will be better because he lives there, so I'm hoping he's going to take us to a few places and we can actually see more of it.

"When you are on tour, it's very rare you actually have much time and you don't know where you are going, so you don't see much of the place.

Graeme - "We are all buzzing about it, meeting back up, is great and playing the album live will be good to hear the songs again.

"Hugo speaks better English than me, so most people will understand us, except when we get to Dundee and Sunderland, haha.

"Also, meeting some very good friends who I haven't seen for a while, will be fantastic."

Oh, and I don't play golf. haha, I can't get away with those "yellow" trousers...

So what can fans expect from the UK tour?

Graeme: "Hopefully a good performance of some well-crafted songs, with heart, in remembrance of Dickie Hammond."

Hugo: "Yeah, it's kinda strange as we all feel he's here with us, we can hear him shouting, "Haway Son, fuckin cammaannn."

You can see all of Medication tour dates for July below: