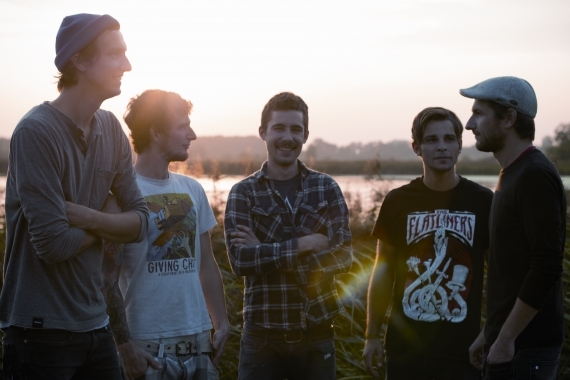 So with Idle Class’s album release in the UK coming ever closer, I decided why not catch up with the band and discuss all things Idle Class.

What are your musical influences personally and for the new album?

“It's hard to say actually, i think our main common ground is based somewhere in the modern punkrock area like the Flatliners, Polar Bear Club or stuff like that that we are actually always being compared with. Even if we all listen to a wider range of music. Just in this second Benny and me (Tobi) are annoying Josua and Stefan with an hour of emo stuff from the last decade while we are on our way to Munich :)”

Why should people listen to Idle Class?

“There is not really any reason to listen to our music. The songs most likely won't keep you alive or something like that. Just drink enough water and eat healthy food. And if you want to you can listen to our record while doing that or come to a show so we can make new friends.”

What can fans or new listeners expect from the new record?

“To me most of the songs are a bit more mature and the record seems to be a bit more serious than the songs on our previous EP, which felt like a naive kid enjoying toys'r us. What doesn't mean that they're less fun, but it took a little longer to write the songs. But to bring it to a point you just should expect another punk record that you might or might not like. Maybe a special one to some people and completely overrated and boring to others. Find out for yourself and let us know.”

“Maybe the four of us, except for our guitarist Josua, are living together in one flat. Not that spectacular, but true. But I honestly don't know why anyone should care about that fact haha.”

As the release of your album ‘The Drama’s Done’ in the UK is coming ever closer, how are you feeling?

“To be honest we don't even know the exact release date, but when we first heard that Emil will release the record in the UK it was really special and different in a good way compared to the fact that the record would come out in Germany. As we didn't expect that. So we are really stoked!”

You are a very hard working band, would you say that this is what has got you to this point with your band?

“It does not really feel like work to be honest. To us this is exactly what we wanted to do for a long time, with the difference that this time we have a great partner in Blackstar Foundation and probably our personal circumstances make it possible that we can put a lot of time and effort into the band. Sure there is a times, when it feels like work, but then you just have to remember what happened up to this point of year and then it is fairly easy to appreciate every little thing that comes with this band.”

"That's always a tough one, but as sentimental and cheesy as it sounds, in the end we just want to keep doing what we do under the circumstances that will keep us up and going. And if we'll get to know more people on our way that like and spread our music, we couldn't be happier."

What can fans expect from a live Idle Class show?

"Five jerks that are making fools out of themselves while playing music. But honestly, somehow we always feel so energetic and good as soon as we hit the stage and do the best we can without fucking up all our parts. If this energy reaches the audience and some strangers throats are yelling our lyrics and are clenching their fists all of a sudden, we couldn't ask for more. Cause no matter how much fun it is to write and practice the songs, a great show just tops it all.”

“There are no actual plans for a tour yet, but i'm pretty sure that we will make it to the UK in early 2014, at least we would really love to!”

“Touring, touring, touring. We already have loads of mainland shows on schedule and we will probably start writing songs for a new release pretty soon.”

Keep up with the band by liking their Facebook page https://www.facebook.com/idleclass . You can also see a review of their new album on the site at http://www.shoutitloudreviews.com/index.php/music-news/item/178-idle-class-the-dramas-done-album-review .