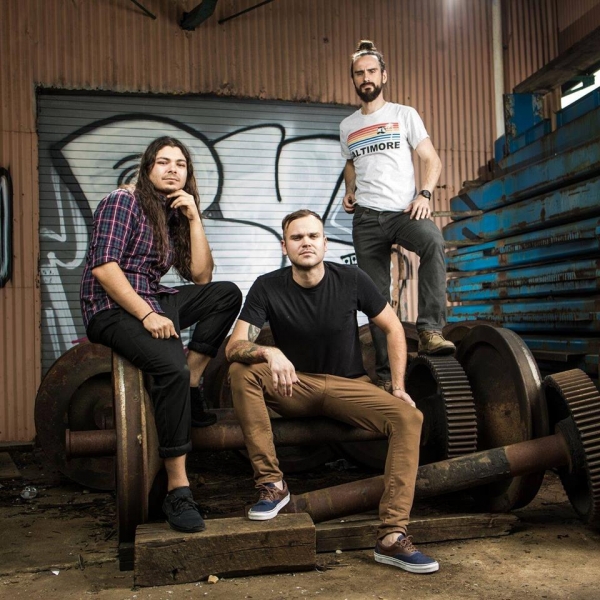 Baltimore’s alternative prog – rock/post – hardcore outfit, Megosh have released their first full - length album ‘Apostasy’  via Outerloop Records. So we caught up with the band to find out more about the release.

“We are well!  Finch just did a sick kick-flip with a fingerboard.”

You are set to release your new album 'Apostasy' can you tell me a little bit about the release?

“We are so excited- this album took a LONG time to come together and we are so proud of it.”

You have released your track 'I Stole From The Dead', how has it been received so far?

“Better than we anticipated. It is perhaps a little different from previous offerings, so we were a bit nervous that people might not like it.  But the response has been great!”

What and who has influenced your new album?

“Well that's a broad question!  We wrote the majority of the songs isolated in a house on the Cherokee Indian Reservation in North Carolina- an aspect which definitely influenced the album.  We were there for almost three weeks, writing music together with no cell phone reception.  It was a great experience to be in such a beautiful place and not be inundated with the stuffs of everyday life and to be able to just focus on writing music.  As to the who... we all came in to the band with different influences, so it's difficult to answer collectively.  But there are a few bands that we all have high on our list of influences... The Mars Volta and Queen come to mind.“

What is your favourite track on the album and why?

“We really don't have one.  Once we finally finished recording the album, we had to ask the great folks at Outerloop Records which tracks we should use for releases, etc.  Even then it was difficult to get a consensus-- everyone had different favourites.  Actually, we are quite proud of that fact- there are no filler or throw-away tracks on the album.  If even just one of us was not feeling a track, we would rework it until we all liked it.”

“That's a tough one... we certainly weren't approaching it as a concept album.  Actually, "I Stole From the Dead" represents a common theme on the album- honesty.  Honesty, even if it reveals the ugly truth.”

“A song idea may start with a melody line, a riff, or a cool chord progression.  We'd establish a tempo and just record the riff or a chord progression straight to the computer, and then we built on it in no particular order.  Sometimes singing will go on next, sometimes bass, sometimes drums, sometimes even a guitar lead.  At Cherokee we had a computer set up for recording in three different rooms- electronic drums in the living room, bass and keyboards in one bedroom, and another bedroom where we'd do guitars and vocals.  So we all might be working on parts of different songs simultaneously.  Or maybe we'd all be in a room together obnoxiously shouting ideas at whoever was tracking a part.”

What do you think sets you apart from other bands and artists on the scene?

“The fact that we have 3 singers and the 3-part harmonies.  We don't scream much either.”

“We are all Scientologists.”

“Well, being that our album is coming out in December, it's all about supporting the release-- getting the word out, promoting, social networking, working on videos, etc.  We don't have any tours scheduled but we should be touring a lot next year. We do have a show in NYC at Studio at Webster Hall on November 17th-- it's one of our favourite places to play, and the other bands are killer as well, so get there!! In the UK? No problem, that's what jet airliner's are for!”

Can UK fans expect to see you live anytime soon?

“We damn sure hope so!!! Seriously, we are chomping at the bit to get over there!”

Read 1653 times
Published in Interviews
Tweet
More in this category: « David Stücken of David and The Curse - Interview Shallow Side - Interview »