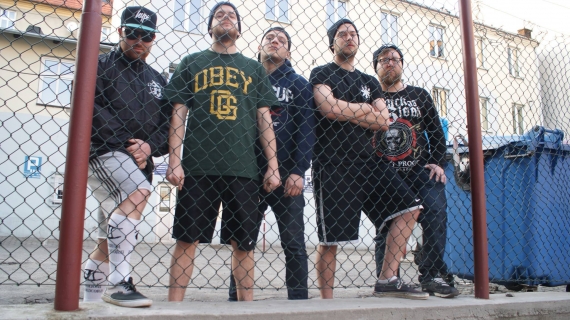 So I caught up with The Departed to have a little chat about the band and their new album ‘Steal The Crown’ which has just been released! You can see the review of the album here http://www.shoutitloudreviews.com/index.php/music-news/item/179-the-departed-steal-the-crown-album-review .

What are your musical influences personally and for the new album?

“Speaking personally, I spent my early years listening to Fat Wreck/Epitaph type bands, Skatepunk and then later moved into hardcore, old and new and nowadays I'll listen to most things depending on what I need to do, or how I'm feeling, but mostly punk/hardcore. Most of us we're brought up on a pretty similar diet of music really, with Joey (vocals) being into more of the metalcore side than the rest of us. As for influences for the new album we all absolutely love melodic hardcore and anything fast, powerful, emotive and gets us going. Bands like Comeback Kid, Champion, Stick to Your Guns and Casey Jones are a few of the albums we usually have on repeat in the van.”

Why should people listen to The Departed?

“You should listen the The Departed if you're a fan of fast, emotive, energetic and powerful music with a few melodic nuggets thrown in there too. We write honest music we all love to play, music that means something to us, not pandering to what is popular at the moment or to current music trends.”

What can fans or new listeners expect from the new record?

“Fans can expect a different sound with the addition of relatively new vocalist Joey. He brings a much larger vocal range and we have tried to use that to its full potential! As a result we've produced (with the help of Nath Smith, Demoraliser) an album we're all proud of, an album that includes a lot more guitar and vocal harmonies than we have put out in the past, but still retains the grit and punchiness of the previous records.”

As your album ‘Steal the Crowd’ has just been released how do you feel it has got down with fans?

“The feedback from fans and friends has been incredible, lots of kind words have been passed our way and we're greatful for all of it! It makes it all worthwhile as a band to hear someone say nice things about something you've produced, something you have invested a lot of time, effort, sweat, everything into.”

What is your favourite song from the album and why?

“Personally my favourite song is Memories Last. I think the chorus is catchy as hell, and it was instantly stuck in my head after our practices on the way back home. The line 'live every day like it's your last' is something that really resonates with me personally and lyrically it's quite an emotive song, which is something that really gets me going! On top of that, I absolutely love playing the song live, specifically the last 30 seconds or so and from our times playing it the audience has too!”

What do you want fans to take from ‘Steal The Crown’?

“I think it's always best that people interpret things in their own way, in the same way my favourite song from the album and the reasons behind that will be different to the rest of the guys. The title 'Steal the Crown' and track 'faithless' suggest something about our views on the world and everything in it but I'm always wanting people to come to their own conclusions and draw from the album the most important thing to them. So I guess I'd like fans to take whatever they want from it, but I'm sure I speak for all of us when we say that I hope you take something from it, whether that be lyrically or musically.”

What can fans expect from a live The Departed show?

“We do our best to entertain anyone who is kind enough to come along to a show. We have a lot of energy when we're playing as the music means a lot to us and we feed off how the fans are reacting, so it's a mutual relationship really. If you want the best of us, get yourselves moving! We've had many compliments about our performance in the past and we're constantly trying to better ourselves. If you come along to a show, try and count the high kicks Pollard (guitar) does, that should give the non-movers something to do.”

“There are indeed. We're currently planning a 5 days UK, 5 days Europe release tour starting at the back end of August. We have a show already booked in Middlesbrough which is the hometown of me and Pollard (guitar) so we're really excited for that.”

Keep up to date with the band by liking their Facebook page at www.facebook.com/thedepartedgyhc  .