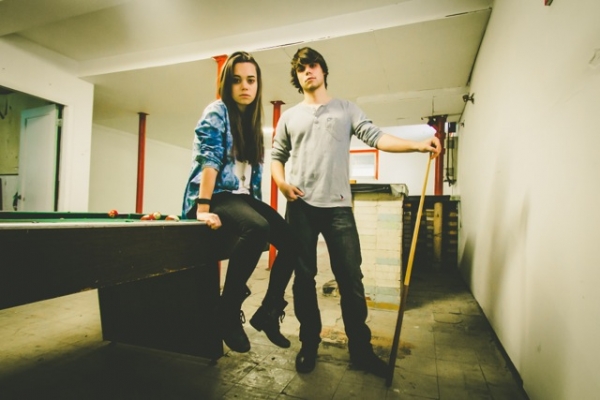 We caught up with Jocelyn and Chris Arndt to chat about their new album ‘Edges’.

“We're absolutely great! It's been pretty crazy in Jocelyn and Chris world these past couple months. We actually just got back from a tour with our band that took us through 20 states in 22 days. It was insane. Today we're back in the studio working on some new material before our next show at The Hall MP in Brooklyn on October 21st. So again, I guess you could say it's been pretty crazy. But in a good way.”

You have released your new album 'Edges.' Can you tell me a little bit about the album?

“Sure! ‘Edges’ is our first full-length. We released an EP a year earlier which we loved, but we're really, REALLY excited about ‘Edges’.

“Our whole approach was to make this release a true front-to-back listening experience. Don't get me wrong, we wanted the songs to be great individually, too... but we also wanted them to be cohesive and make sense together, as a greater whole. We grew up listening to albums that way, from the first track to the last. I think that's the way most artists intend people to hear what they're making, and it's definitely always a very different experience than just cueing up a specific favourite. Nowadays there's such a focus on singles that some of that front-to-back listening gets cast aside a little bit. So throughout the whole writing, recording, and editing process, we were always conscious of the fact that we wanted to make a record full of individual pieces of music we believed in, but also offer a listener the opportunity to get to know us better through a whole album listening experience. And we're really proud of how it came out.”

What and who has influenced you both as individuals and artists?

“Oh man. There are so many artists who inspired us musically... But I think when it comes right down to it, our parents are honestly our greatest inspiration, for music and for life in general. Growing up, Mom and Dad always made sure music was part of our household. They encouraged us to listen, engaged us in conversation about music, and most of all never criticized us for our taste... even when I went through my angsty middle-school obscure-rock phase.We owe the exposure to all of biggest musical influences to them... They have one heck of a CD collection. We got pretty lucky in the parent department. Look for our Mom and Dad rocking out at virtually any show we do within driving distance of Upstate NY.”

What is your favourite track on the album and why?

“Ha. So hold on a second and let me grab 12 little pieces of paper, write the name of one song on each piece, put them in a hat, close my eyes and pick one... Seriously, every song on this album is our favourite, especially when we're writing it or developing it in the studio. And each track has a different story behind it. I can tell you about ‘More Than I Say I Do’ being our first ever ballad I wrote in 10th grade, or young girls messaging us about how Cinderella inspired them to express themselves. Shame cracked the FMQB Top 200 Singles in The US as an independent against major labels. Where's The Rain is about a very personal and tragic loss. Hot has kept us on the Jamband Top 30 album chart for six consecutive months and G Love played on it with us. I could go on and on.... They're all so different, and they all mean very different things to both of us. They've all got one thing in common, though: they make us happy.”

How has the album been received so far?

“Well, Mom and Dad like it, so at least that's covered. I think the most significant challenge of the release process has been getting radio to believe in new music. There is so much great new music out there that even the most artist-friendly program directors can't even begin to get to 10% of what they receive. Luckily we have a great team behind us every step of the way, and with a lot of hard work we were able to move into territory that even a lot of big-label artists don't always get to explore. Edges cracked the FMQB AAA Top 200 Albums and Top 200 Singles with airplay on more than 200 stations nationwide. The music has been fared even better in the Jamband/Contemporary Blues genre. The album reached #14 on The Relix Jamband Top 30 Albums, and it's stayed on the chart for 6 straight months! Crazy stuff. But again, regardless of that, Mom and Dad like it.”

“Each song has its own individual identity, vibe, and story. As a whole, though, the album is about being comfortable with who you are. It's about being honest and true to yourself. It isn't about being fearless... it's about those moments when you can push those fears aside just long enough to stand up and say "This is who I really am." We want everyone to have more of those moments.”

“We could literally answer this question with an enormous list of every adjective known to mankind. Some that come to mind right away are "funny," "energizing," "motivating," "educational," "confusing," "frustrating," "more frustrating," "inspiring," and "joyous." I think if we were to sum it up, though, "rewarding" would be the winner.”

Tell me one fact about yourselves that you don't think your fans will know.

“Okay, besides music and the fact that we're siblings, when we're not traveling around the country or recording we both go to college at Harvard University. We have a semi-normal college life, with the exception that when everyone else goes on break, we go on tour!”

“Right now, we're in the studio working on a special project with some really cool players. That project will be announced in late October. We'r also (believe it or not) already working on our next album, which we plan to released in late February or March. We're very excited about the new music! We'll also be on the road a lot. We just wrapped show dates with Vertical Horizon and Delta Rae, and we're excited to play everywhere we can! ...and if all the stars align, I'll graduate from Harvard this Spring. I'm pretty stoked about that, too. (special thanks to my professors for letting me miss so much school.)”

“Hmm. If we were to describe our music, past, present, and future, in three words, I'd say... "JOCELYN AND CHRIS." This music really is who we are. We write everything together, we're each others' closest allies, and we believe in each other. That doesn't mean we always agree, but it DOES mean we value each other and we know neither of us could do it without the other. Honestly, we wouldn't want to.”

“Just search Jocelyn and Chris! We'll pop up. And don't hesitate to hit us up to say hey... We'd love to hear form you!”