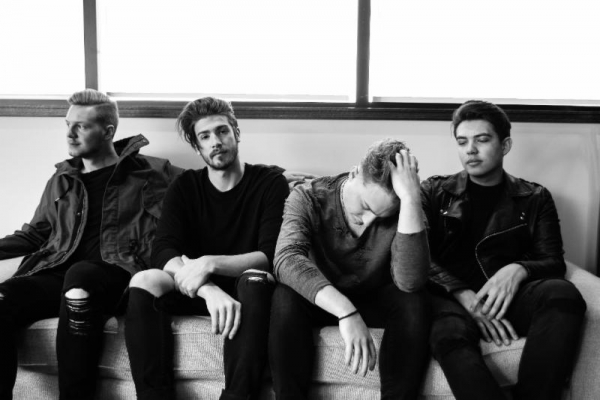 We caught up with The CMDWN to find out more about their upcoming release.

You have just released your new single 'Shiver', can you tell me a little bit it?

“One of our darker ambient songs! ‘Shiver’ is a song we wrote last winter, with the intent of a sexual sounding 90's industrial vibe.We were heavily influenced by acts like Nine Inch Nails for the instrumental side, And I think we really hit the "nail on the head" (pun intended) on capturing what we set out to do. We're really stoked on how it turned out!”

What made you pick it as your new single?

“Well, we haven't released a song in a little over a year, and the last song we released had a sexy vibe to it... So we wanted to make sure the first song we released off of the EP was something consistent sounding with our previous single. There are a lot of different sounds on the EP, though, so we felt this would be a good transitional song for us.”

You are also gearing up to release your new EP, can you tell me a little bit about it?

“I think the thing we are most proud of is that we are a DIY band, so all of the music, videos and art content have been recorded, filmed and made by us! There will be six songs on it, including ‘Shiver’ of course. The other songs are all very different songs for us, we have our heaviest song as well as our most pop-influenced song on this EP. We wanted to try and cover as much ground as musically possible with this release, so there is something on this EP for everyone! I don't want to spoil too much since it will all be released soon... But I can confidently say it is a very ambitious set of songs, and we truly feel we have created something unique and original that no one else is doing right now.”

“Well we did a lot of self-producing on this record, so the writing and recording process initially starts with us sitting in our home studio just trying to come up with random beats, riffs, synth melodies, etc. And once we find a solid idea or melody we like, we'll start to write all of the instrumentals around that. We go through multiple song drafts, changing sounds, guitar tones, parts, song structure and all that.Then once all of the instrumentals are written, we sit down and write vocals to it. As far as vocals go, Chris (our vocalist) will put his phone on record in front of him and just free style over the instrumental. And I'd say 8 out of 10 times, the first thing Chris comes up with vocally is what makes it on the final track! So we try to keep our writing ideas and style as organic as possible, and I think that helps make the music more genuine in the end!”

What can fans expect from your new music?

“They can expect versatility on this EP, music that makes them feel something, and music they can hopefully make memories too. That's what we're setting out to do.”

“So many things have influenced our new sound! We all love so many types of music. But the one thing we didn't feel had been done the way we're doing it, is the mixture of Hip-Hop/R&B with Alternative Rock. We're heavily influenced by artists like The Weeknd, Banks, The Neighbourhood, Bring Me The Horizon and Linkin Park. So we just wanted to try and take all of our favourite things from their musical style(s), and merge it into our sound.”

“Our bassist Andy is the only original member at this point.He moved to Provo (our hometown) in 2008 and pursued creating music, and pushed for years to help drive the direction we are at today.”

“To have all of our new material released! We're so excited to see how it does, and what kind of response it gets.”