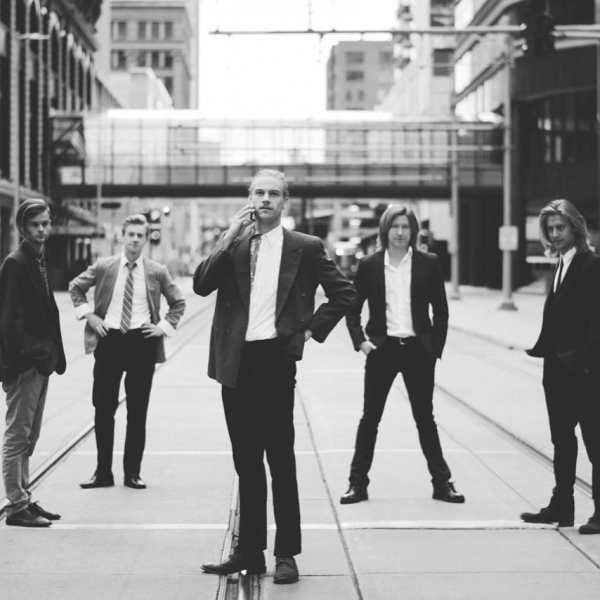 We caught up with Whosah to chat all things from their new single ‘Ghost Town’ to their new EP ‘Work’. See what guitarist Mack Grimes and drummer Dave Grimes has to say below.

Mack: “Great, thank you. We're all doing great. How are you?”

You have recently released your new EP 'Work' can you tell me a little bit about the release?

Mack:  “Well, it started with the release of a single off the record called ‘Ghost Town’, that came out November. That was released along with a ‘moving picture’ video, a visually-minimalist kind of backdrop aimed at bringing the focus back onto the music and reflecting a simple message. Each song on the EP had a moving picture which we released in stages over the last few months; and actually, those four videos ended up being featured on PopCrush a few days before the full EP digital release in April. We took the show on the road right after that, went on tour with our good friends John Chuck and The Class, that was a blast. And then we just recently released a full music video for "Ghost Town".

How has the release been received so far?

Mack: “It's been incredible. We've been flattered by the things we hear from people who have been longtime supporters of us and our music, they've been super pumped about the new tracks and our direction as a group. Also we've made a ton of new friends, people who've never heard us before who really enjoyed the songs and just connected with them in inspiring ways. Metrics have been encouraging too, the EP broke into the CMJ Top 200 Charts which was unprecedented for us and incredible to see. We've been getting a lot of love from writers and magazines all over the place, even a little from the U.K. and Australia, just a lot of cool stuff. But more important than any of that, we've talked to people through social media or at shows who connect emotionally with the message behind the lyrics and in turn connect with us in ways we never could've foreseen.

What was the recording and writing process like for the EP?

Mack: “The songs you hear on the EP began over two years ago with sketched out lyrics and some really rough demo versions. Spencer, our lead singer and lead songwriter, would present the band with a really bare-bones idea, just a few chords or a melody, and we all kind of wove our own additions in from there. We worked remotely with Chase Coy in Nashville, who would be producing and recording the music, to pick our favorites from an ongoing vortex of song concepts. Recording the album all happened in about a week and a half, but there was a lot of tweaking and post-production to put it through after that. Final versions of the tracks didn't come out of the process until several months after that, and even more time before it was in disk form, but we've loved every minute of it.”

What and who has influenced your sound and style on the record?

Mack: “We all bring our musical influences to the table with us, and we're all in this collaborative writing process, so there's a lot of different places this record came from. Dave listens to a tons of The 1975 and the simple, feel-good grooves he puts down are kind of drawn from that. Dallas has been the understudy of this guy Jasper Nephew (of Owl City), and lots of his precision, as well as his creative new guitar tones, have been inspired by watching and learning from Jasper. Spencer listened to a lot of Twenty-One Pilots and Betty Who, both artists that are really raw and honest, and that's the kind of musician he wants to be. Of course Chase Coy and his music had a part in the style of the music. We've been super inspired by the way he's able to create an emotion using really simple, judicious melodies, and he's also super creative with what sounds he brings together, and some of that inspiration found its way into our vibes for sure.”

Do you have a favourite song on the record, if so what song and why?

Mack: “Huh. Man, there's something unique about each one, something we love in each one of them. If we had to pick a favorite it would be ‘Forget About It;, but mostly because of how our fans have reacted. We'd been playing it live for a few months before the record was released; there's a super simple line throughout the song that just says ‘Forget about it’, and Spencer likes to teach the crowd to sing along with that line before we play it. The awesome thing is he doesn't even have to teach people anymore. The fans that have been coming to every show in our hometown have heard it and they know it pretty well, and they sing it loud along with us. That is an incredible honor, and it's brought new meaning and new life to that track for us.

You released 'Ghost Town' as your lead single, what made you pick it?

Mack: ‘‘Ghost Town’was the leader because it has some themes that kind of carry throughout the record. The whole record is about the conflict of Work; there's this balance between doing things you know are responsible and doing things you're passionate about. Every song explores that balance a bit, asks questions about what we're doing and why on earth we're doing it. "Ghost Town" has a little bit of that despair, of feeling lifeless and directionless, and it also has some of that hope, that the places we live in don't have to make us feel dead.

Can you tell me a little more about the single?

Mack: “‘Like the inspiration for it, the story behind it? Sure. ‘Ghost Town’ originally came from work that Spencer was doing with a group of people that just felt lifeless to him. The first line, "Come 5:15 this place is a ghost town", was literally the state of the office, because nobody there had any interest in being passionate about their work or in community with each other. The song came out of our desire to live a life that we believe in and are invested in long after we "clock out". But we believe the responsible, have-to-do things don't need to be separate from the passionate, excited, want-to-do things. Those two often sit side by side in everyday life and that's okay. We want to do them both; we want to "live like I'm alive now / Not gonna wait to situate and settle down’”.

Mack: “Dallas is the only cat person. And for that reason alone he may never fit in.”

Dave: "Before the new record's digital release, it was already in the top 200 on CMJ charts. So far the band's travels have been mostly in the Midwest, but recently we've been looking to expand upcoming tours through the rest of the year to places we've never been to. Schools in Phoenix, Rhode Island, Washington DC, and Canada are spinning "Work" right now, and we can't wait to try to extend those relationship by going out to as many of those schools as possible and getting to know them at a live show."

Mack: “Easiest central spot to find us is whosah.com. We'll give you a free song for joining our mailing llist, you can stream tunes there, or you can grab links there for all our socials. We're super active on every medium, and you'll be talking directly back and forth with one of the dudes from the band on any of them.”

We also just released 4 "moving still videos" for the new EP, you can find all those at: youtube.com/wearewhosah .