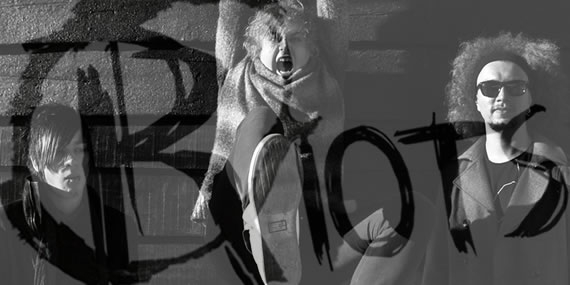 A couple of weeks ago I reviewed a band called ‘Riots’, who when describing themselves said, “(Riots) is not just a band, it’s a voice, the voice of a generation that is silenced and hushed by the money grabbing global markets and politicians that are only looking out for themselves. In an ever-growing society where the rich are getting richer and the poor poorer. As Riots we intend to get in your face, onto your streets, into your televisions, onto your radios and make some fucking noise!”

Here’s the link to the review for those of you who haven’t seen it yet. http://www.wix.com/chloebevan/shoutitloudreviews/apps/blog/riots-single-revolution-review

Last weekend I got the chance to meet with Tom Lynam from the band in a London café and did a face to face interview and here’s the interview below.

Q: Why did you start a band and who were your influences?

A: “There are plenty of influences out there, aren’t there? Probably Dave Grohl’s being one of the biggest one’s out there. Just being able to adapt yourself to any kind of situation and he’s just an icon isn’t he really? So Dave Grohl and bands like Biffy Clyro, Sex Pistols, Rage Against The Machine, people like that.”

Q: What were your influences for the new sound?

A: “Well I just think with what is going on in the country today where there is a lot of anger amongst young people, especially when it comes to the rise in student fees, the way the government are treating people and tax and stuff like that. It was that kind of aggression that I also wanted to represent if you will. I want to take that and fuel the music with it, that’s what influenced me to do that. “

Q: Is this why you picked such a strong political message with the band?

A: “My old influences were classic rock bands, the grunge stuff like ‘Nirvana’ and ‘Alice in Chains’. That aggression I have been missing out of my life over the last few years. It’s nice to pick up a guitar and be able to shout about some stuff I feel very strongly about.”

Is it quite different from playing in your previous band ‘Pegasus Bridge’?

A: “Yes very. It’s nice to be independent again and to stand at the front again; I have had enough of sitting in the back, so it all good.”

When forming ‘Riots’ did you want to go off into a completely new musically direction?

A: “Yeah, I just wanted to do what I felt was right at the time. I was missing a lot of my influences from being in ‘Pegasus Bridge’, so it was nice to step back and remember what I enjoyed playing and what really mattered to me, and it was just nice to get across some feelings and some thoughts that I have been having lyrically. And to then just get up and play some guitar again and sing about what I felt.”

What do you want people to take from your music when they listen to it?

A: “I want people to feel like there is a chance that you can shout about something that you aren’t happy about and that there are other people who agree with you. I want ‘Riots’ to not only be a band, but also like a community where if you aren’t happy about something shout about it, you are allowed too, you don’t just have to go along with the rules. Whether it’s people personal / one’s self where you feel like you can’t express yourself the way you want to, whether it’s what you wear, how you have your hair, or whether it is like the bigger situations what are going on in the world. That to me is something important right now that people feel like they have a voice. Because at the moment there are little pockets of people that are demonstrating and it’s just not enough. If people realise that there is one voice that we can all go on, and then I think together we are stronger. So to me that’s what I want to do with ‘Riots’.”

Where do you hope and realistically see ‘Riots’ in 5 / 10 years’ time?

A: “Why not headlining a major festival? It would be great. Wembley Stadium, why not? If enough people enjoy it and get into it, then you know skies the limit.”

Do you prefer the recording and writing process or touring and playing shows?

A: “There are just so many good points to both. I really enjoy recording at the mount, because I have never really had chance to record on my own especially because before JD and J got involved in the band, it was really just me. So I would go and recorded the drums, bass, the guitars and everything myself. I loved that just having the freedom; I don’t have to ask permission from anyone or see if anyone else agrees with me, I can just go in. I love this side of things, experimenting with sounds and it is something I am doing a lot more of now, but then I miss touring and I miss traveling. I miss the interaction with people and I think that’s really key to what musicians do, that interaction with ‘fans’. I don’t want to call it ‘fans’ it’s a bit cheesy.”

Will there be a tour anytime soon?

A: “Hopefully, obviously it’s just building a buzz around the band because these no point in going all the way into Newcastle to play for just 5 people. So obviously I am going to be recording more music and maybe getting an EP or an album together over the summer. As far as progression goes, yeah I want to tour it and I would love to tour it … but it’s all in good time.”

Can the fans expect any new music in the near future?

A: “Yeah, I’m always demo-ing and writing and the thing is, it’s such early days that I just want it to be heard. So it’s not a case of making money out of it. I want to just put the music out there, even in its most basic form so that people can enjoy it and if there is a message people can relate to, then get involved.”

Q: Why should people listen to ‘Riots’?

A: “Why? Why not? I think ‘Riots’ is a band that is missing from today’s sound in music. I think that there is a lot of generic, put together music that’s very much suppressed into what the industry thinks you want to hear, a lot of even bands and musicians are playing what they think you want to hear and I miss the whole kind of unexpectancy of what is going to happen next for music. I think people should listen to ‘Riots’ because there is something new to be done, it may not be brand new, there isn’t going to be 11 stringed guitars or something like that, it’s about the right energy, the right vibe and I think you should listen to ‘Riots’ because there is a message there and if you agree with that message and you want to get involved then the doors are open.”

A: “Cluster fuck is one of my favourite terms at the minute, energy and an anti – culture something along those lines.”

Make sure you checkout the band on http://www.facebook.com/RIOTSmusic as well as downloading there song ‘REVOLUTION’..