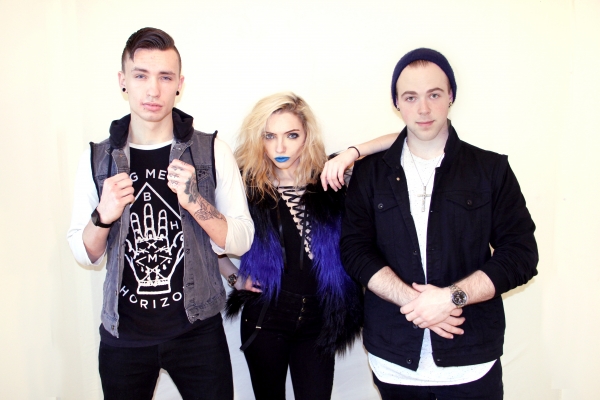 We caught up with newcomers, VISTA to discuss their debut single ‘On The Brink’ as well as, what 2016 has in store for the trio and it all sounds pretty exciting for the alternative rock outfit.

You are just about to release your debut single 'On The Brink' can you tell me a little bit about the release?

“OTB is our first single! Hope had a solo career for about 10 years, so she’s put out a bunch of stuff, but this is the first thing VISTA is releasing as a band. We’re stoked about this, we’re all a little nervous, but the vibes we’ve gotten so far for the band have amped us up!”

What made you decide to release 'On The Brink' as your first single?

“Hope and Wolf wrote it specifically to be our first single! Lyrically, it’s all about the transition from Hope’s solo career to becoming a band. It’s kind of a weird thing to write about lyrically, it sounds weird thinking about it. But we all thought it’d be a cool thing to touch upon before jumping into writing about other things. It was the first VISTA song written!”

What can fans expect from the new release?

“OTB is a huge anthem. It’s the best offering we could put forward to describe this genre we’re trying to personally identify with and create, which is ‘anthemic alternative rock.’ It’s super drum-heavy, chant-filled, and Brian sings on the track, which we were all stoked about. This song was going to identify us, so we wanted to put out what we thought was the best representation of VISTA!”

What was the writing and recording process for the two singles like?

“ We’re behind a bit on our original release timeline, we had a few setbacks, so “On The Brink” is going to be the only single we release before we put out our upcoming EP. But the writing process had Hope and Wolf locked in the VISTA cave (our rehearsal space), trying to piece together things from scratch. The guys love the recording process, it’s Wolf’s favorite thing because he can pretty much track everything besides vocals. It’s a long process, it’s tiring; but the recording process is rewarding.”

“ Our upcoming EP, which will be out in April, a bunch of shows in the late Spring and hopefully throughout the summer, and we also have some more content planned for release in the late Summer/early Fall! We want to just keep putting out content for everyone to either listen to or watch, just a constant flow of content. Our EP comes first though, we’re working hard on that now!”

“ We’re all pretty amped to do some shows and see what the energy is like. That’s where a lot of our inspiration is coming from right now; the idea of live shows and seeing people hyped on the music. That’s what it’s all about and we want to make sure we stick to that ideology.”

“ We all have individual Twitter and Instagram accounts (@hopevista, @wolfvista, @briankvista), and then we have our band accounts! Twitter is @ThisIsVISTA, Instagram is VISTAband, and Facebook is www.facebook.com/VISTAband! We’re hoping to get our own website up relatively soon as well, and an online merch store… once we get our act together and finish this EP!”