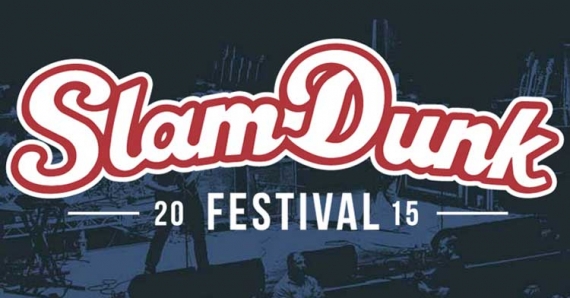 The Slam Dunk Festival is here once again and with that being said, so is the summer festival season! (Even if the weathers not on side, it’s in spirit)

Tampa, Florida band, Set It Off opened up the main stage today with their summer tune ‘Forever Stuck In Our Youth’, and continued on with a sensational set, filled with tracks from their new album ‘Duality’, such as, ‘Bleak December’, ‘Wolf In Sheep’s Clothing’ and ‘Ancient History’. The band even slipped in their cover of ‘Problem’ featured on the Punk Goes Pop album that showed another side to this already very talented band.

This was a very excited and high-energy set from the newcomers to the festival, with an on point set this was a band not to miss and they opened up the festival in style!

As Is It brought their pop punk vibes to the Macbeth stage in another great opening set of the day. As the band continue to promote their new album ‘Never Happy, Ever After’ that was released recently, they performed to a large crowd and finished they’re set with their single ‘Dial Tones’ that went down a storm!

Newcomers, Pvris drew in a huge crowd to the main stage playing their songs ‘St Patrick’ and ‘Fire’ to just name a few. This was a cracking set from the band, featuring brilliant and powerful vocals from the front woman, Lyndsey Gunnulfsen. Despite the rain, the fans were no deterred from seeing the Massachusetts based band.

Pvris ended their set with their excellent single ‘My House’ that saw the crowd jumping and dancing, but it also featured You Me At Six’s Josh Franceschi on vocals, unfortunately due to technical difficult his vocals couldn’t be heard.

This was a performance full of heart and honesty as he continues to play through a collection of his song with the addition of stories in between songs as fans continues to spill from the tiny venue.

With heartfelt sing-along’s and even a crowd sing-along to a trumpet solo, this was a set that music fans shouldn’t be missing!

Essex lads, We Are The Ocean, who have been away for sometime have just released their new album ‘Ark’ this month and what’s better than playing the main stage at Slam Dunk to go along with it (nothing, that’s the answer, if you didn’t know)!

They mixed in a few new and old songs for a festival friendly set, featuring their new single ‘Holy Fire’ as well as, older songs like ‘Good For You’ and ‘The Waiting Room’ which the band finished with, this was an excellent set from We Are The Ocean.

Cartel where going to bring the summer vibes with their pop punk set, despite the rain. This was an upbeat, fasted paced set from the four piece, with a streamlined set of one great song after another. Due to technical difficulties toward the end of the set, the crowd got to see frontman Will Pugh, performance a vocal guitar solo that added a very unique edge to this set! This was a set not to be missed if you’re a pop punk fan!

The Impericon Stage saw Stick To Your Guns play an aggressive and fast paced set, with their hardcore sound. This was a band that were on a mission today with their killer set.

Local lads, Lower Than Atlantis hit the main stage next as they entered the stage to the Star Wars theme tune, not something you hear everyday. The band got straight to it with ‘Criminal’, ‘Emily’ and ‘English Kids In American’.

This was a fun set from Lower Than Atlantis, with a very tongue and cheek style to it. They continued on with tracks such as ‘Deadliest Catch’, ‘Words Don’t Come So Easily’, ‘Beech Like The Tree’ which saw crowd sing alongs and crowd surfacing.

Mike Duce even got into the pit to do a rendition of ‘Another Sad Song’ however was ended shortly after, due to the guitar cutting out, with Mike finishing the chorus with ‘’ Don't cry, We all make mistakes from time to time. Unfortunately, for me, trying this was mine’. This was an excellent set from today!

New Yorkers, Bayside brought a definite punk – y - er side to the Macbeth stage today with their punk rock sound that was well received by the fans.

The energy and good vibes just kept coming on the main stage, with Don Broco being the next band on and after being away for some time, they received a very warm welcome.

Don Broco’s set showcased a lot of new music from the bands up coming album, if these songs are anything to go by you are in for a treat of an album. This was an energetic set from both Don Broco and the very excited crowd. As well as, playing new songs the band also slipped in some older songs, such as ‘Hold On’, fan favourite ‘Priorities’ because who doesn’t like the walk, and ‘You Wanna Know’ and ‘Thug Workout’. Don Broco are always a festival must see!

Monster Energy stage show was graced by Finch in the early evening, however the set lacked a little sometime, with everything else going on at Slam Dunk today.

Transit kept the high energy going on the Macbeth stage, with their pop punk sound and catchy choruses. This is the bands third time at the festival and this showed as the band got the crowd going straight away. This was an excellent set from the band that saw the frontman surfacing in the last song.

Back on the main stage, Taking Back Sunday took to the stage, however this was another set that again lacks a little something and never really got going. They drew in a huge crowd, however, sadly the vocals were practically none existent.

As it is Slam Dunk Festivals tenth year, what would be more fitting them setting You Me At Six headline with their debut album ‘Take Off Your Colours’ having its tenth birthday as well. The answer, nothing!

You Me At Six had a cracking set filled to the brim with a mix off all their albums with a very heavy dose of ‘Take Off Your Colours’ featuring songs such as ‘Truth Is A Terrible Thing’, ‘Save It For The Bedroom’, ‘Jesous Minds’, ‘Kiss and Tell’ and ‘Take Of Your Colours’!

The set was stopped for sometime, about five songs in due to a injury in the crowd, but as soon as You Me At Six were back on stage, they got the audience back on side very quickly.

This was a set filled with fan favourite that saw the crowd jumping and dancing throughout, not to mention a few sing-alongs, which really just make for an all round great end to a festival day.

Slam Dunk has done it once again and made one hell of a festival!